There are a couple of things that brought me to my love of geography, history, the various cultures of the world, and the differences between how people grew up. The gameshow of Where in the World is Carmen Sandiego? is the first of those two things.

Given the premiere date, I think I must have accidentally started catching the show right in the beginning of season 1; I remember watching it when I went to the neighbor next door to my grandparents’ house, and that would have been late 1991. It didn’t take long before my father got me a (pirated) version of the PC game. I was given a legit version of the deluxe game a year or so later.

It was the only thing that made me wish I was still living in New York City (where it was filmed), as it seems young-kid-aetherspoon was extremely good at understanding things like geography. Turns out, young-kid-aetherspoon (along with young-adult aetherspoon and current-day-aetherspoon, for that matter) hyper-focused in geography and history, with this being the first real exposure I had to the former. I loved it SO MUCH and always wished I had been on that show.

After watching the video, all of those memories came flooding back. I even started singing along with the songs that I had long since forgotten! I’m glad to see that there was no behind-the-scenes drama going on, or reasons why my favs were troubling, or anything other than “they messed up once and let the kid back on the next season”.

The second one of those things that brought me to my love of geography, for reference, was December of 1991 when my class put on a school pageant demonstrating the various winter holidays and traditions all throughout the world. We each were given countries of our respective ancestries – being of Irish and Native American* ancestry, I was to cover Ireland and the British Isles. Most of my classmates ended up covering locales in Central and South America, with some covering various other regions in the world that needed additional coverage by my primarily-latinx-or-black class. In addition, I gave the opening lines of Christmas and other Winter Holiday traditions in the pageant, being given a little booklet to say my lines out of instead of memorizing. Turns out, I memorized them anyway based on physical placement (young-adult-aetherspoon used this in theater later), so I memorized a few pages of lines and information and continued on.

My teacher, however, was worried for one student (I want to say her name was Janna?) who had come into class a bit late. She was born in Finland and didn’t know anyone in the class, so my teacher asked me if I was willing to do another country as well, joining Janna on stage during that section. I knew where Finland was on a map (because of watching Where in the World is Carmen Sandiego?, of course), along with the other countries of Scandinavia, so we covered all of them. I went down to the library to do research (which I’m pretty sure was useless, but the thought counts) on things, and performed in that pageant.

Holding a candle, experiencing my first bit of pyrophobia in my life, but I performed!

Anyway, I thought I’d throw in a happy memory today for you all, from eight year old me. Yay.

* DNA testing later on says this is false, but this was the family belief at the time.

If you enjoyed this facts, visit my blog @sciencefactss for more interesting science facts.

I hate this. It feels like forbidden knowledge. Incredibly useful. But cursed.

*duct tapes the wheels of a toy car and throws it in the room*
BEHOLD A HOUSE!

Good kitten, spoon. 8 – what are three songs that suit them? and 50. can they sing? can they dance?

Ooo, songs? I quite like music. Oooo, so much more music that I haven’t been exposed to! Hopefully your planet is okay, the last few we checked on only had a few thousand people left.

Black Sheep by Metric seems to fit me really well – I mean, I’m pretty much nothing like my family or the military school I was trained in, so the title is a win there. I’m just waiting for the world to end, so that fits… it is kind of creepy that way. I don’t know about taking a ride from anyone though, I don’t like people that way, ew.

Smashing the Opponent by Infected Mushroom would work pretty well from my later academy days. Thanks to Naisa’s influence, I went from a D+ wizarding student to the top of my class and dueling some of the instructors even. One of them in particular was SUCH a perv though that I sort of just… forgot about limiting my abilities. You know, I don’t know if he actually survived or not, I kind of ran away the next night.

Empty Streets by Scandroid pretty much summarizes my experience once we went into space though. I’m not really alone, Cuddles is always with me and Ghost is probably nearby somewhere that I can’t see, but those drones should definitely be watched out for. We were in a space station – station, psh, that was TOTALLY a Wizard’s Tower. I hate those! Sure, there was a bunch of fancy technology and blasters and stuff, but the point remains – WIZARD. TOWER. I’m still trying to figure out how these so-called circuits work though. Naavi is made of a bunch of electrical signals coming from a power source that I can only describe as ‘what happens when Wizards get bored up in their towers’ and…

Oh right! I’m a MASTER of dancing.. on a technical level, anyway! It just… doesn’t seem to come up when trying to stop an omnicidal maniac from trying to become a new god in the next universe, you know? But get a good beat and give me some nice shoes and I can tap better than everyone I know!

The less said about my singing the better though. Oy, CL still brings up my attempt at singing lessons when I was half a century old. My father thought I was killing a bird and blamed my servant for it. *cries*

Songs? Yeah, I like some music I guess. Hm, let’s see… oh, that’s a lot of music to choose between – must have been while I wasn’t paying any attention.

Bully from the River City Girls OGS really has some nice tones to the lyrics. I like how there is the threatening “don’t you bully me” motif, and as some poor hapless thief figured out, bullying me Ends Ill. *cracks knuckles*

Sabotage by The Beastie Boys for sure, some days seem like it matches everything I do. I’m not entirely sure which celestial being’s plan I keep foiling, but I think they might be called Dee.

The End of an Empire by Celldweller really resonates with me, but I can’t quite remember why. I really wish I remembered much of my history. Maybe I was a part of an empire of some type? (read: spoilertastic reasons)

Can I sing? Well, I don’t know if I’ve tried or not. Let me see. *harmonizes perfectly* I guess that’s a yes? I guess I just haven’t felt an urge to try before. No, wait, I remember doing that on the boat, but I think that was more to lure people to their doom or something, I don’t know.

I mean, I know I’ve danced before. Have you ever danced while pretending to be a less dexterous flamboyant pirate captain who has his crew there to heckle him? I have!

Music is important to sapient life – it is the one thing I have found in common with most species here on Nova. Your Earth music may be a bit strange to me, but the concept is simple enough.

Mr. Roboto by Styx is the most suitable song for me, to the point where I am unsure of what other songs would apply. Assuming you changed that ‘Japan’ place with my actual homeworld of Terra. I wish I remembered more before we arrived in Nova though…

Shatter Me by Lindsay Stirling and Lzzy Hale fits me before my current generation of kids, I suppose. Always feeling like I need more to feel alive, until I shattered myself and became a Knight. ‘Radiant’ is a far superior title to ‘that old malfunctioning golem’.

Ancient Slumber by Rainbowdragoneyes pretty much fits what I felt like when I woke up on Nova. It was quite lacking in life, so I had to make sure I was a good person and restore as much as I could. While I’m not one for swords, the song is quite an accurate fit otherwise.

My children have tried to convince me that I am capable of “cutting a rug” as some would say, but I merely caused the locals to believe there was an earthquake in the nearby area. I am trying to learn how to sing, but I decided that learning how to paint was a higher priority. No matter, I have all of eternity to learn new things.

get to know my d&d characters!

(or: an ask meme made to supplement a lack of new ask memes)

He had dental surgery yesterday. Unfortunately for him, he’s like me in being very resistant to pain killers – his meds should have lasted a day, they lasted half of one instead. He is recovering, though!

Also, this is a giant photo of my cat. My phone even recommended that I take a super high resolution photo. 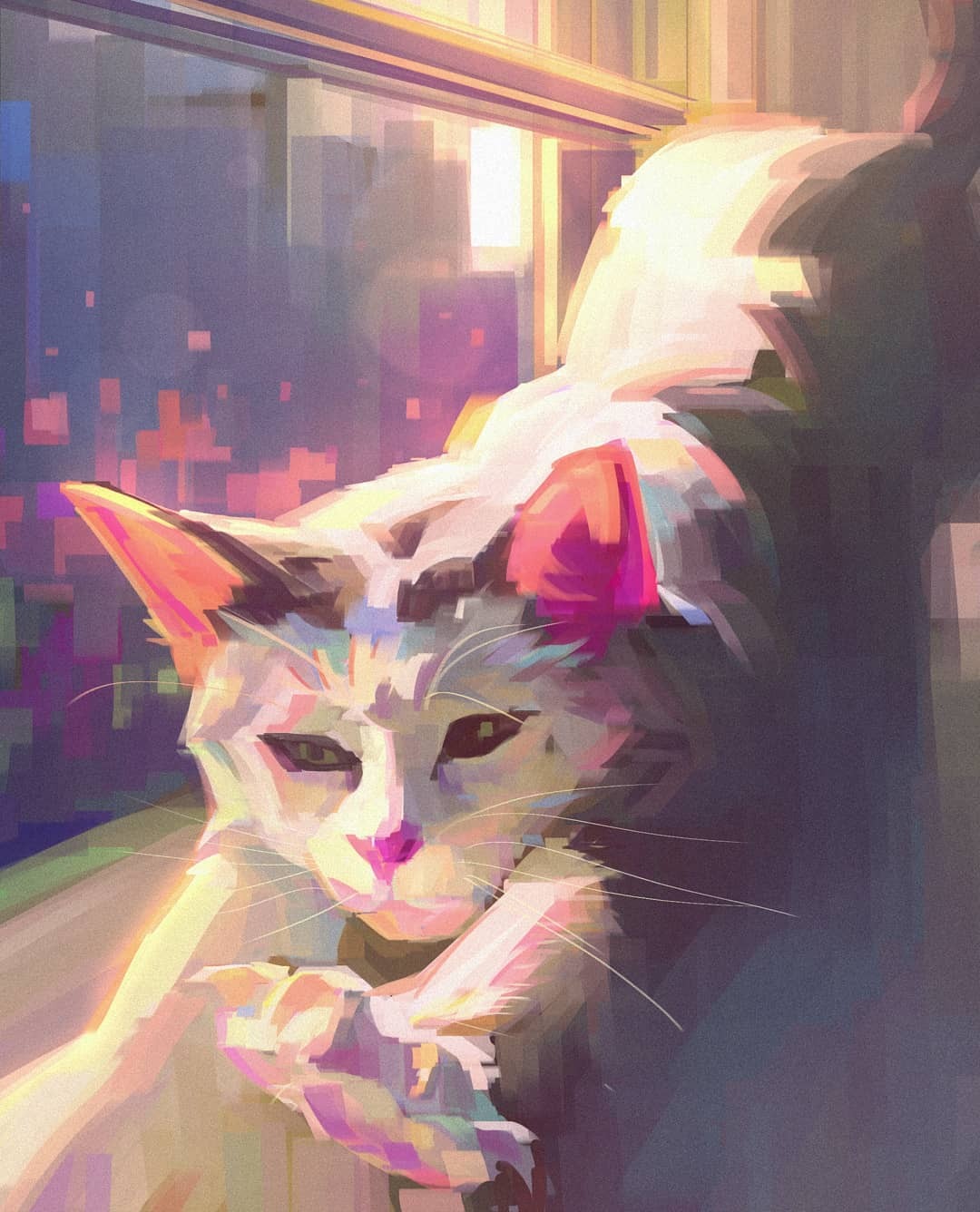 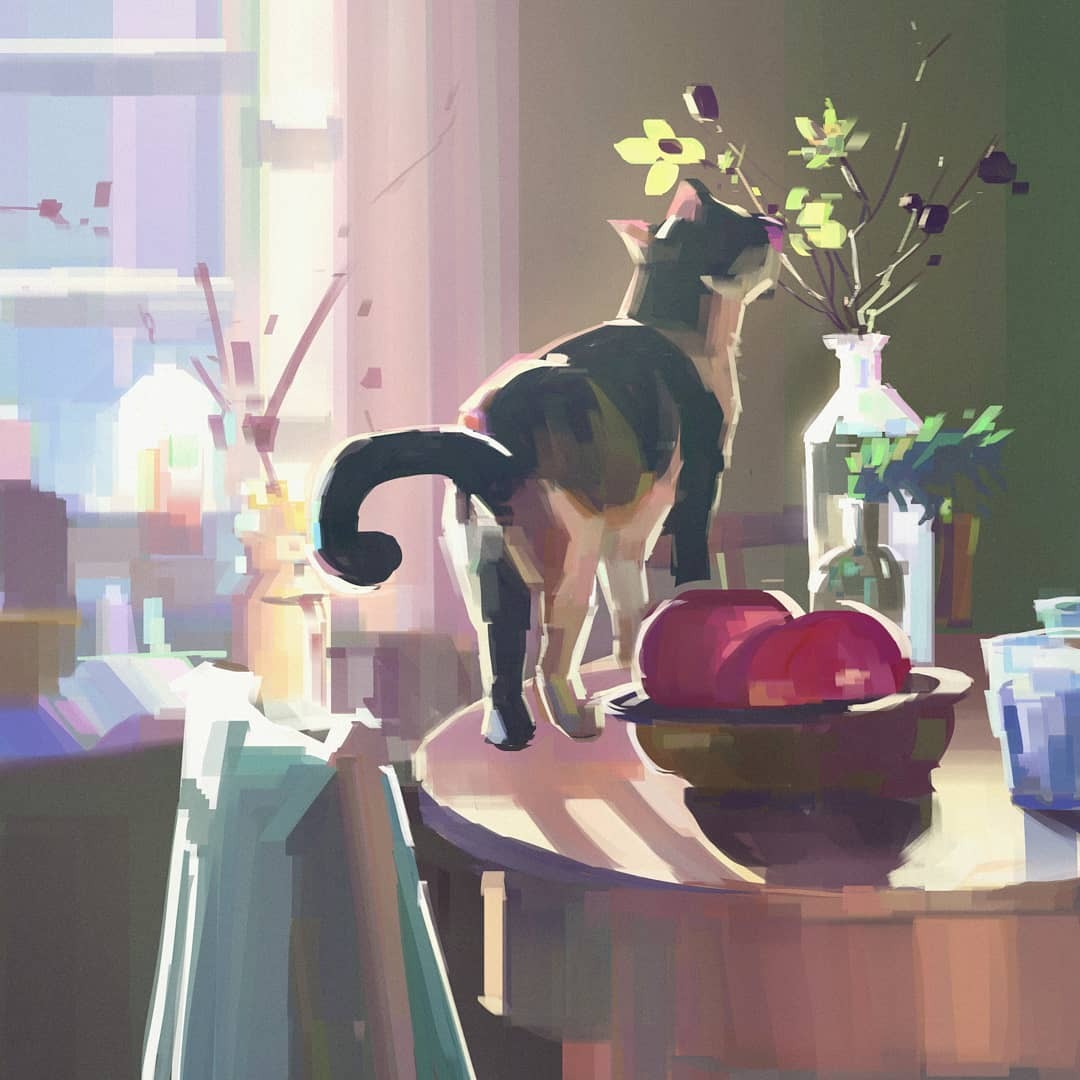 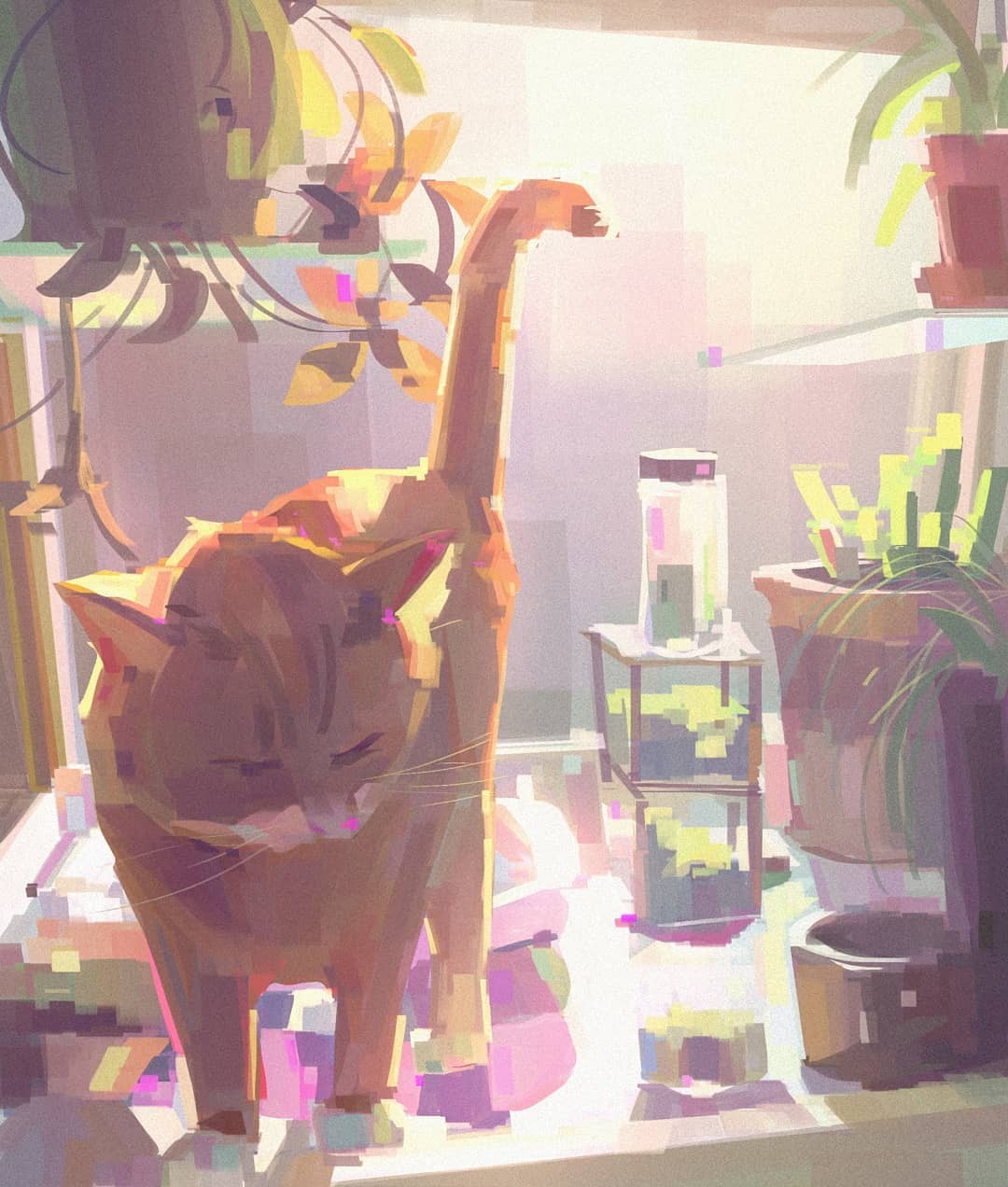 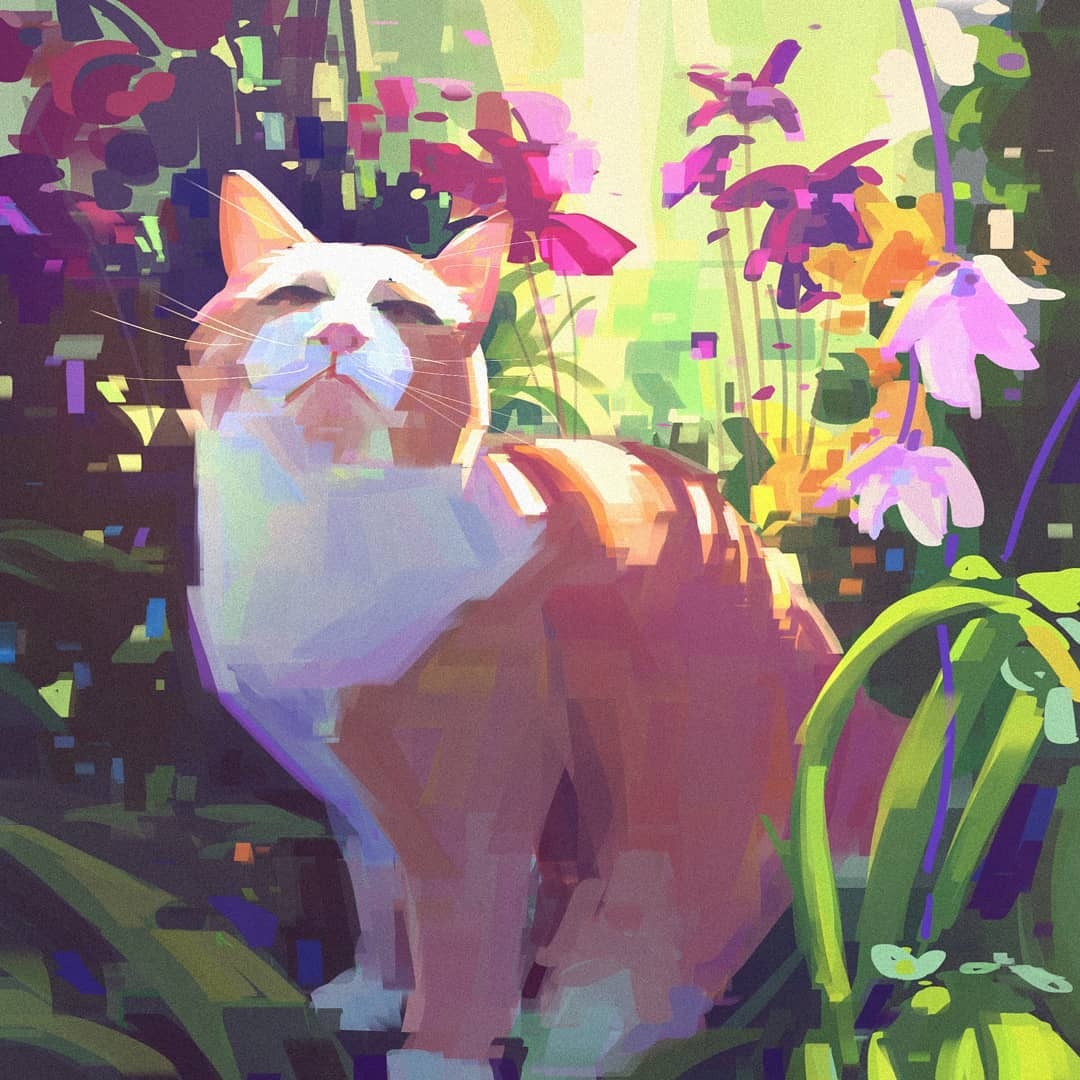 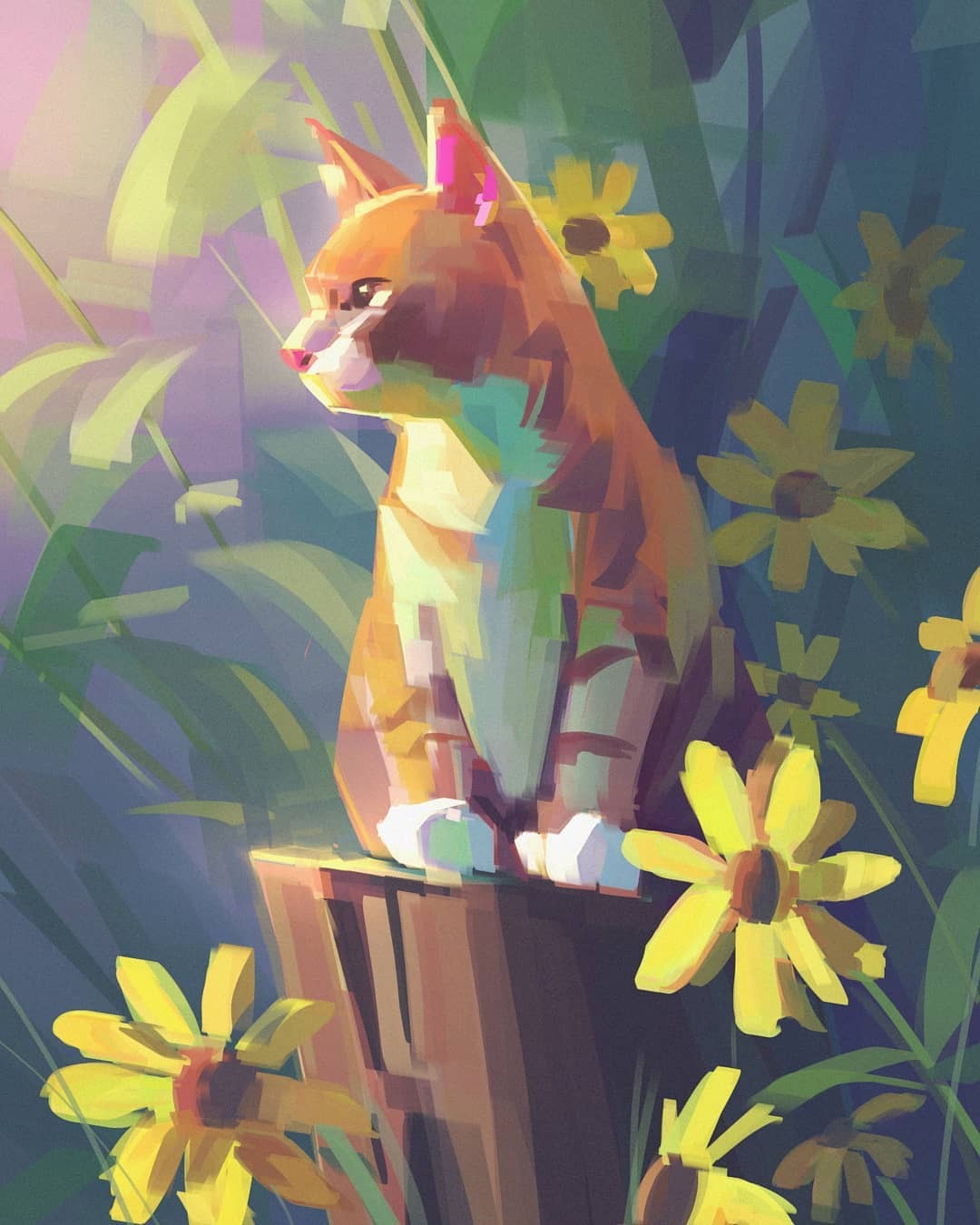 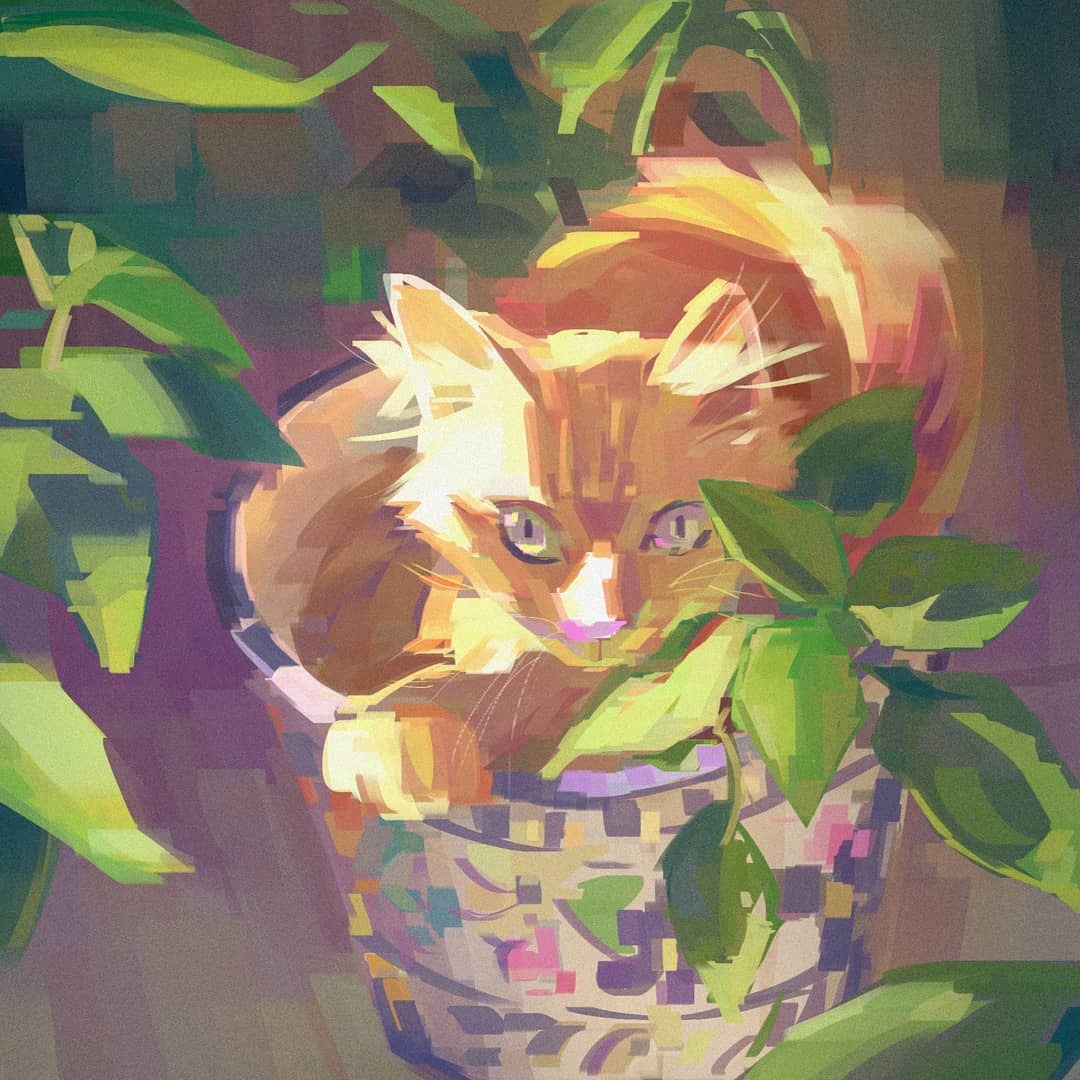 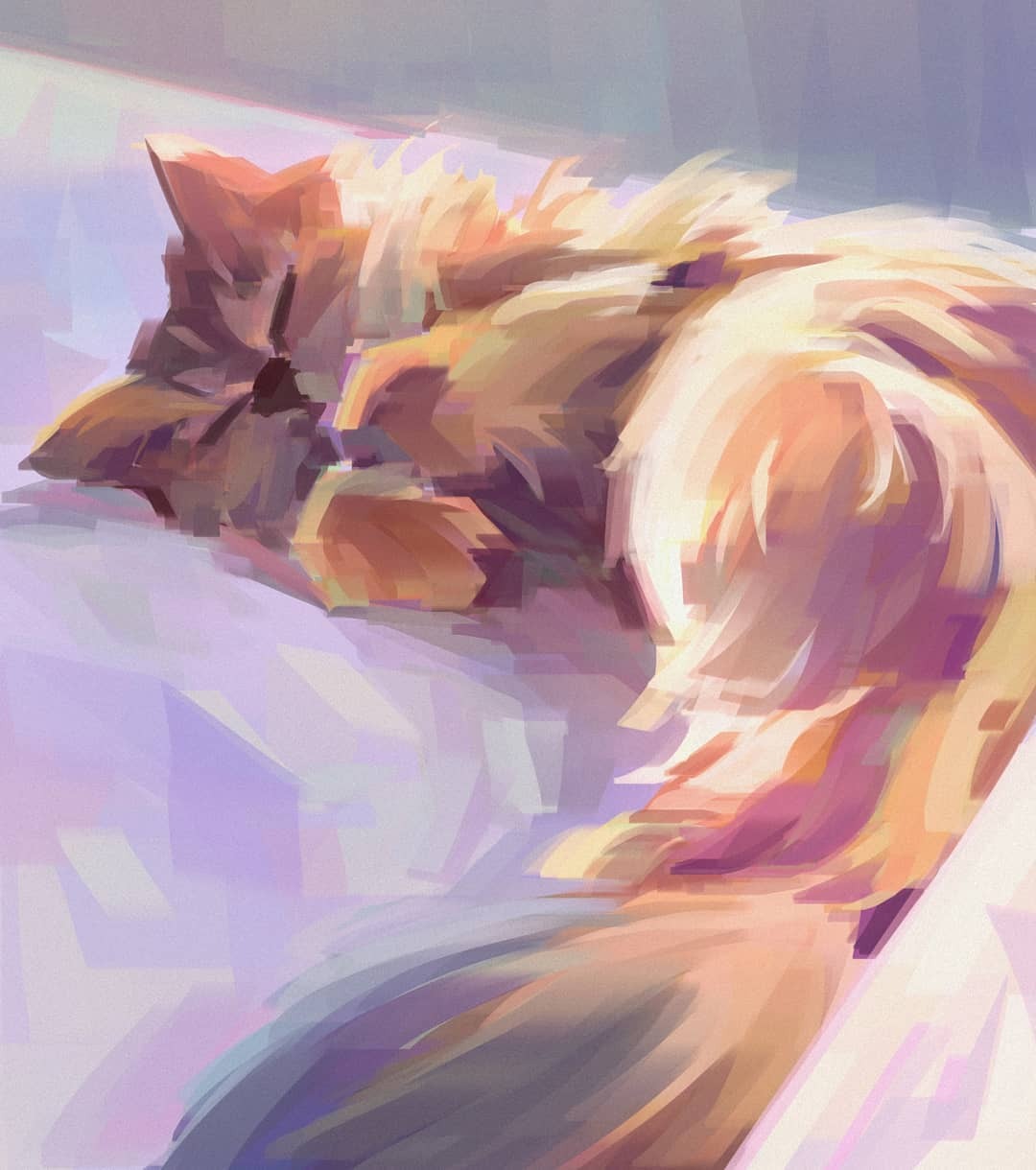 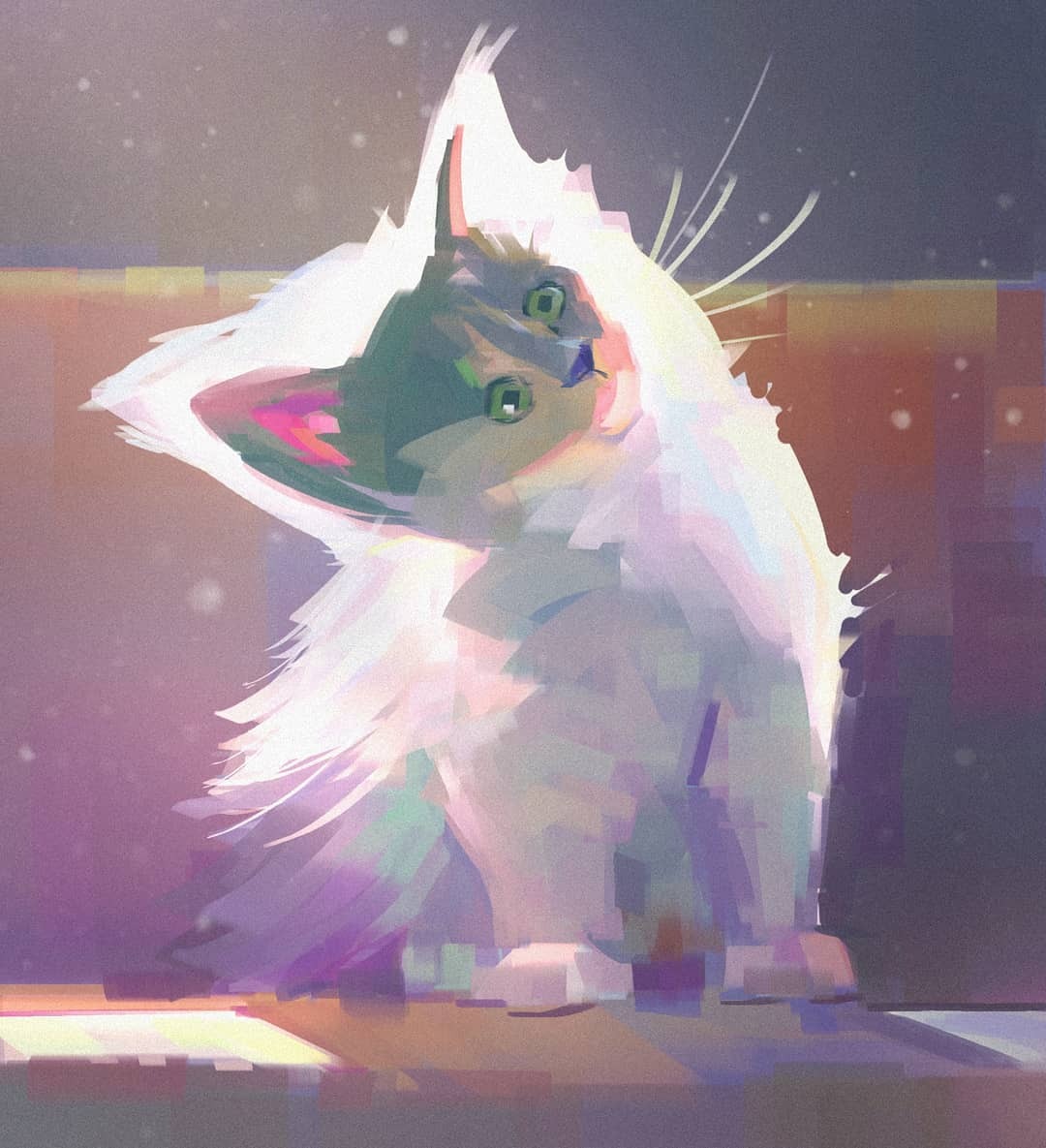 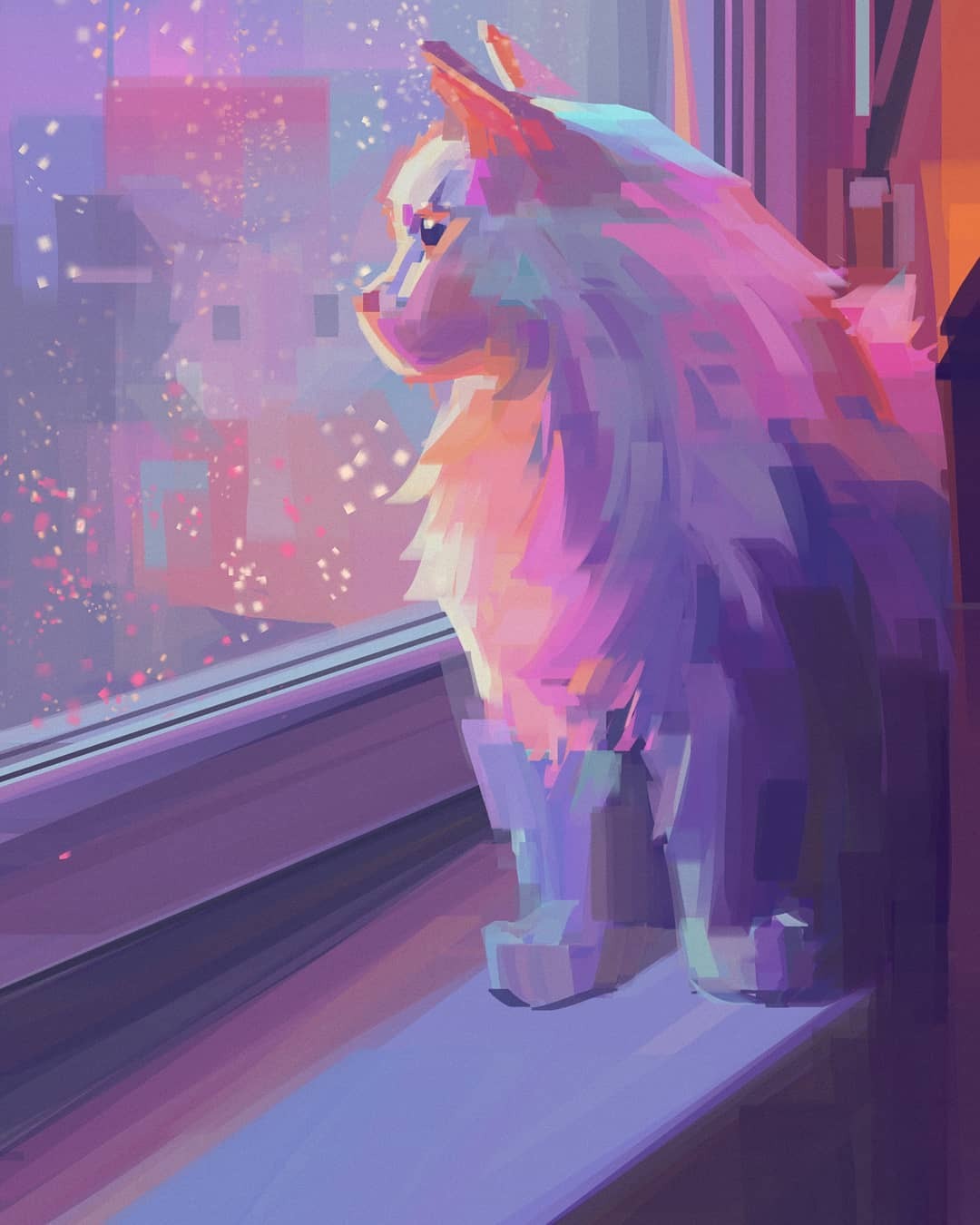 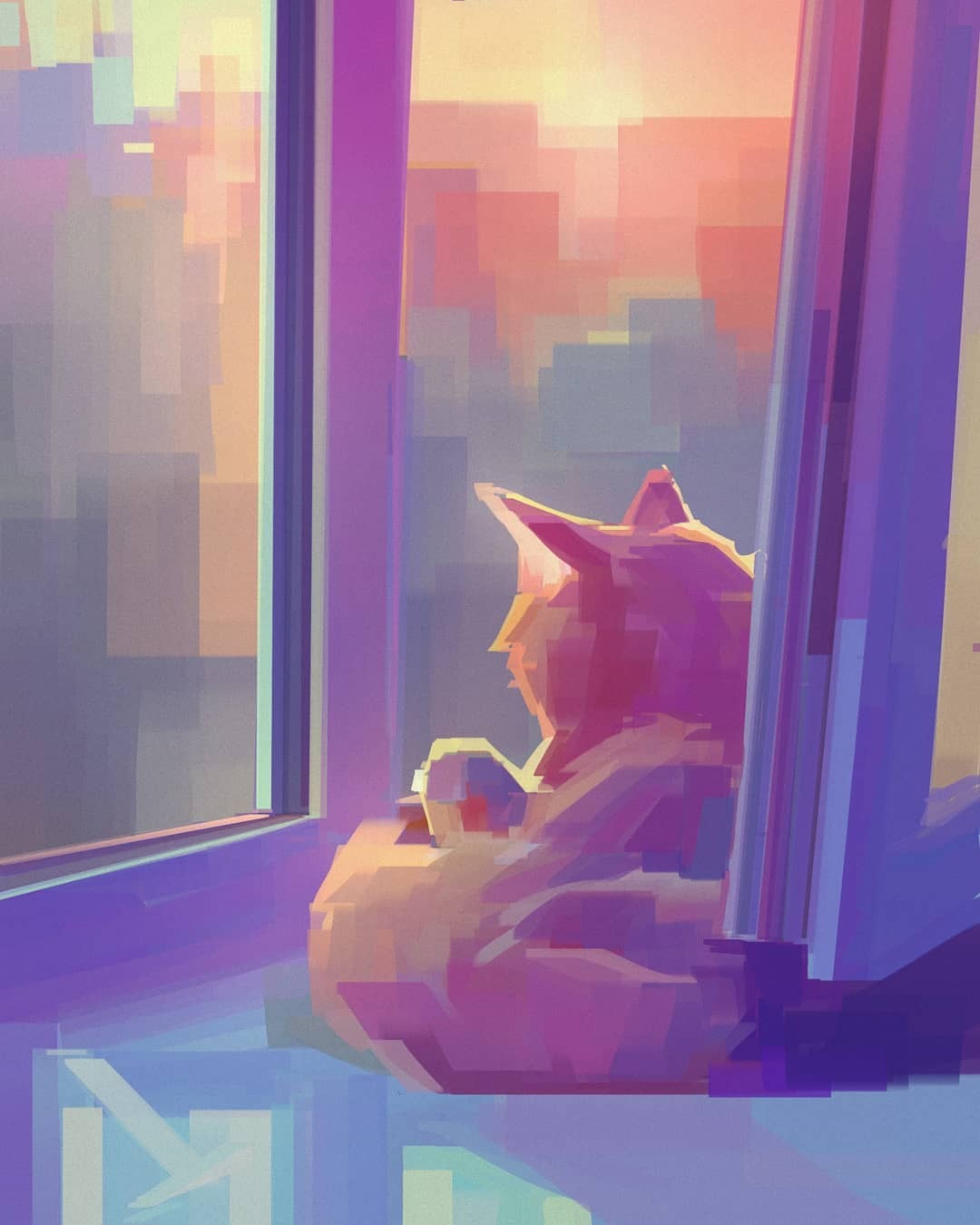