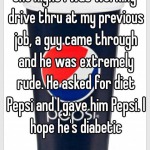 Who wants to play a game called Spot the Asshole?

I’d reblog this on my other blog but people need to learn about this if they work in fast food and I have a lot of followers on my main blog.

DON’T FUCKING DO THIS, YOU CAN KILL SOMEONE WITH THIS.

seriously though, i’ve heard stories of people giving “skinny” people regular soda instead of diet… newsflash: high blood sugars make you lose weight. a skinny persom that asks for diet soda could very well be diabetic… and then if you give them regular soda, you could cause some serious damage, even comas or death. i don’t care how you feel towards a customer, GIVE THEM THE DRINK THEY ASKED FOR.

There is a coffee place near my home and they happens to serve sugar-free hot chocolate being a type one diabetic this is great because it has about half the amount of carbs. This one time I ordered it the employee rolled his eyes at me. When I got my drink I thought it tasted differently but I was with friends and wasn’t paying a ton of attention. Later my blood sugar was in the high 400s and we had no idea why, everything was in order. I had to stay up all night to get my blood sugars under control.  I thought of the employee might have something to do with it. The next day I went back and the same guy was working, my mom confronted him and the manager and the guy admitted that he had given me a regular hot coco and had even put extra sugar in it. He tried to justify his actions because ” how was he supposed to know I was diabetic” and ”I thought just thought she was some chick trying to lose weight that she didn’t need to lose” He lost his job and I never went back there.  But it put be in danger and if I hadn’t caught the high when I did I could of ended up in the hospital.

Something like that hot cocoa thing is ridiculously dangerous. With soda the taste is such a drastic difference that while it is still dangerous you have a much better chance of immediately realizing something is wrong.

I’ve had someone do the inverse to me. While I’m not diabetic, I do have a strong negative reaction to most fake sugars. Definitely not as bad as the above (I’m not in danger of dying), but still dangerous. For me, it is basically like someone slipping me syrup of ipecac.

Seriously, just give the person what they ordered. It isn’t hard.