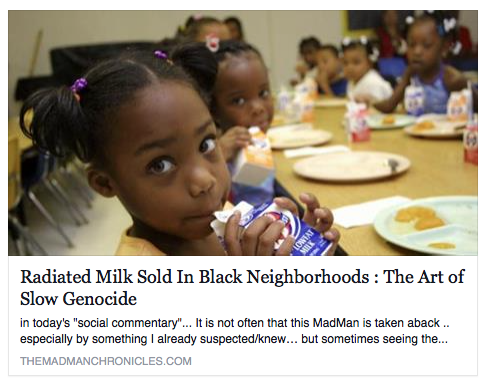 It is not often that this MadMan is taken aback .. especially by something I already suspected/knew…  but sometimes seeing the proof or having it validated can still render shock, disgust and in this case grief.

I always wondered about the high rates of cancer and diabetes in my neighborhood, and in other Black neighborhoods.  These diseases are not inherent in people of African descent.

What makes it worse is that every elder in my family has died at the mercy of one of these diseases.  My mother passed from cancer at the young age of 59… as did every other elder on my floor in the co-op building we owned in Harlem.  I long believed environmental factors played a huge part in the mortality rate of my beloved Harlem residents… so to come across this  … as you can imagine, floored me and left me speechless.

There is a part of me that says “this can’t be true”, but the larger part of me, having grown up in the area, having seen the bad food sold to us ..(even the more affluent of us in Harlem) .. I have no choice but to acknowledge what I have known for years has been validated.

and no one cares…

The only thing I can do as an individual is share the knowledge and information.  If we get MAD enough collectively, raise our voices.. eventually we will be heard.  I hope.

Wow. I always new something was funny with that school milk; I never used to drink it

I can’t actually find any source on this outside of that same video links on the above site… and there are a lot of things wrong with the science of that video – like the fact that irradiated (or radioactive, for that matter) milk wouldn’t cause diabetes, for one. That’d be cancer instead. Not irradiated milk either. For that matter, cows living near safe nuclear plants wouldn’t have ‘radioactive milk’.

If they were producing radioactive milk, I think you’d be seeing far worse problems, given that New York City itself is less than 60 km away from a major set of nuclear power plants that is known to have a less-than-stellar safety record.

We’ve done some horrible things to people due to racism, including a bunch of experimentation on people of minority status. We still do a bunch of this crap, and that is definitely wrong. This doesn’t pass the smell test though – too many incorrect facts in that sole source.