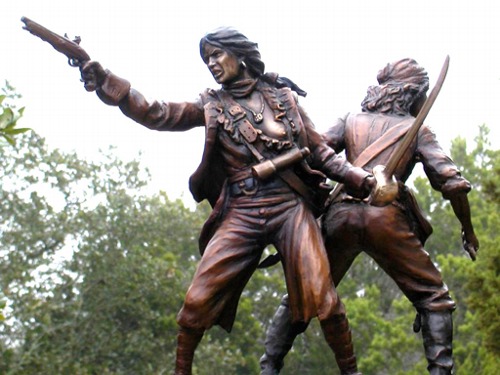 “Anne Bonny and Mary Read were pirates, as renowned for their ruthlessness as for their gender, and during their short careers challenged the sailors’ adage that a woman’s presence on shipboard invites bad luck.”

I’m not entirely sure that the statue really needed to have a tit out.

How dare women try to have nipples.

Actually I’ve seen this before and I can tell you— it’s because these women were bad ass pirates and when they killed someone they’d expose one or both breasts so that when their victim died, (s)he knew that they were killed by a woman.

ACTUALLY Anne Bonny purposely wore loose fitting clothes and displayed her breasts openly at all times during battle – mainly because men were distracted by them, and she took pleasure in killing said men while they were too busy staring at her breasts. Mary Read dressed mainly as a man (after posing as her deceased brother, Mark, for the entirety of her childhood) and both ladies cross-dressed from time to time, hopping between ships. They were known as the ‘fierce hell cats’ due to their ferocious tempers, and were key elements to Captain ‘Calico Jack’ Rackham’s crew – they were the only two known female pirates in the Golden Age of Caribbean piracy. IN FACT, when the ship was captured by the British Navy, Anne and Mary were the ONLY TWO pirates who fought while the males of the crew hid – they were all tried to be hung as pirates but Bonny and Read were both pregnant and were pardoned.

Calico Jack was a lover to Bonny, and as he was to be hung, Bonny’s final words to him were, “Had you fought like a man, you need not be hung like a dog.” Bonny and Read were possibly two of the most badass fucking pirates and they were FEMALE. The more you know.

And then there is Grace O’Malley, a badass enough pirate that she had a meeting with Queen Elizabeth to discuss her backing Irish lords in rebellion. She’s the so-called “Queen of Pirates”. She went along the Irish and British coasts rather than the Caribbean, however.