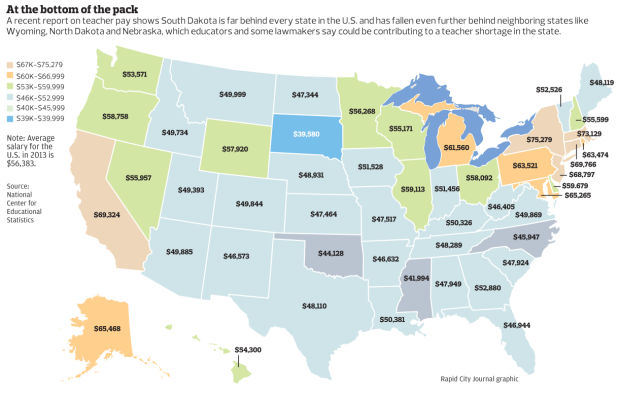 For as long as I was a student in the Rapid City, South Dakota public school system, I was told that our teachers were paid the least in the nation, so we really shouldn’t be expecting a whole lot from our education.

To give you some figures of salaries:

Obviously, we are losing our teachers to other states far within our geographic reach because of the drastic difference in not only starting salaries, but additionally what is being offered for highly-educated and experienced teachers. Because of this, 238 teaching positions, almost 30 percent of the total number of jobs posted in the spring, remained open across the state well past the end of the school year.

This is a major problem.

I knew I fared much better at Central High School than some of my peers in rural communities across the state. And I’m speaking from a point of privilege here; both of my parents are highly educated and I was able to participate in after-school activities that kept me stimulated, involved, and invested in my future. The violin saved my life and opened up a bright future when it came to applying for scholarships to get out of South Dakota. When I’m asked if I’d ever go back to live in the state the reason my stomach sinks is because I feel strongly that South Dakota is lacking that same bright future. More than half (55%) of students enrolled at Central High School as freshman drop out before graduation. Comparatively, the national average of high school students reaching graduation was 80% in 2012, it is not difficult to see how drastically South Dakota students are falling woefully behind.

The reality is this is not an issue with consequences isolated to the people of South Dakota. As one of the nation’s leading providers in the agricultural and beef industries, we are in danger of losing not only ranchers and farmers but savvy business people who are our hope for maintaining footholds in family-owned operations. They are putting food in your pantries and dinners on your plates and they deserve better educations, or we all suffer.

I recommend calling the office of Governor Daugaard (605.773.3212) and saying something along the lines of:

Hi, Governor Daugaard. As a concerned citizen I am troubled by the lack of financial support being granted to South Dakota public school teachers. As you know, we are losing a significant percentage of qualified teachers to other states with more competitive salaries and are failing to fill hundreds of teaching positions across the state. As a result, I’m worried for the futures of not only thousands of students all around South Dakota, but the drastic affects an uneducated populous will have on a national level. Let’s not have South Dakota teachers be the paid the lowest in the nation for another consecutive year.

If the phone isn’t for you, you can also submit a form.